People across Britain are joining forces to salvage unpicked produce. Addressing food poverty and farm waste, it’s a timely response to the cost of living crisis – and a challenge to a ‘broken’ food system

It might be the fresh beetroot in her salads, or perhaps it’s the stress-busting microbiome in the soil beneath her fingernails – either way, Holly Whitelaw is buzzing with positive energy.

In the past six months, Whitelaw – coordinator of Cornwall Gleaning Network – has helped rescue 100 tonnes of surplus, discarded and wonky vegetables from fields and farms.

Food that would otherwise have been thrown away or left to rot in nature has been donated to food banks, soup kitchens and refuges. And with gleaning’s appeal stretching far beyond Cornwall, leftovers – in the freshest sense of the word – are landing on dinner plates up and down the country.

“Gleaning is rewarding,” says Whitelaw. “People are getting the freshest veg literally straight from the fields – fresher than anything you can get in a supermarket and without a plastic bag in sight.”

This practice has been gaining popularity in recent years. There are now 25 gleaning organizations in England, from Penzance and Newcastle upon Tyne. This is an increase of five groups in 2017. It’s perhaps no coincidence that this renaissance has coincided with an unprecedented hike in the cost of living, with one in 10 Britons now struggling to afford to eat, according to food waste charity FareShare.

This type of community-driven, grassroots social assistance is not new. Gleaning the leftover crops to feed the poor is a tradition that dates back to Biblical times. 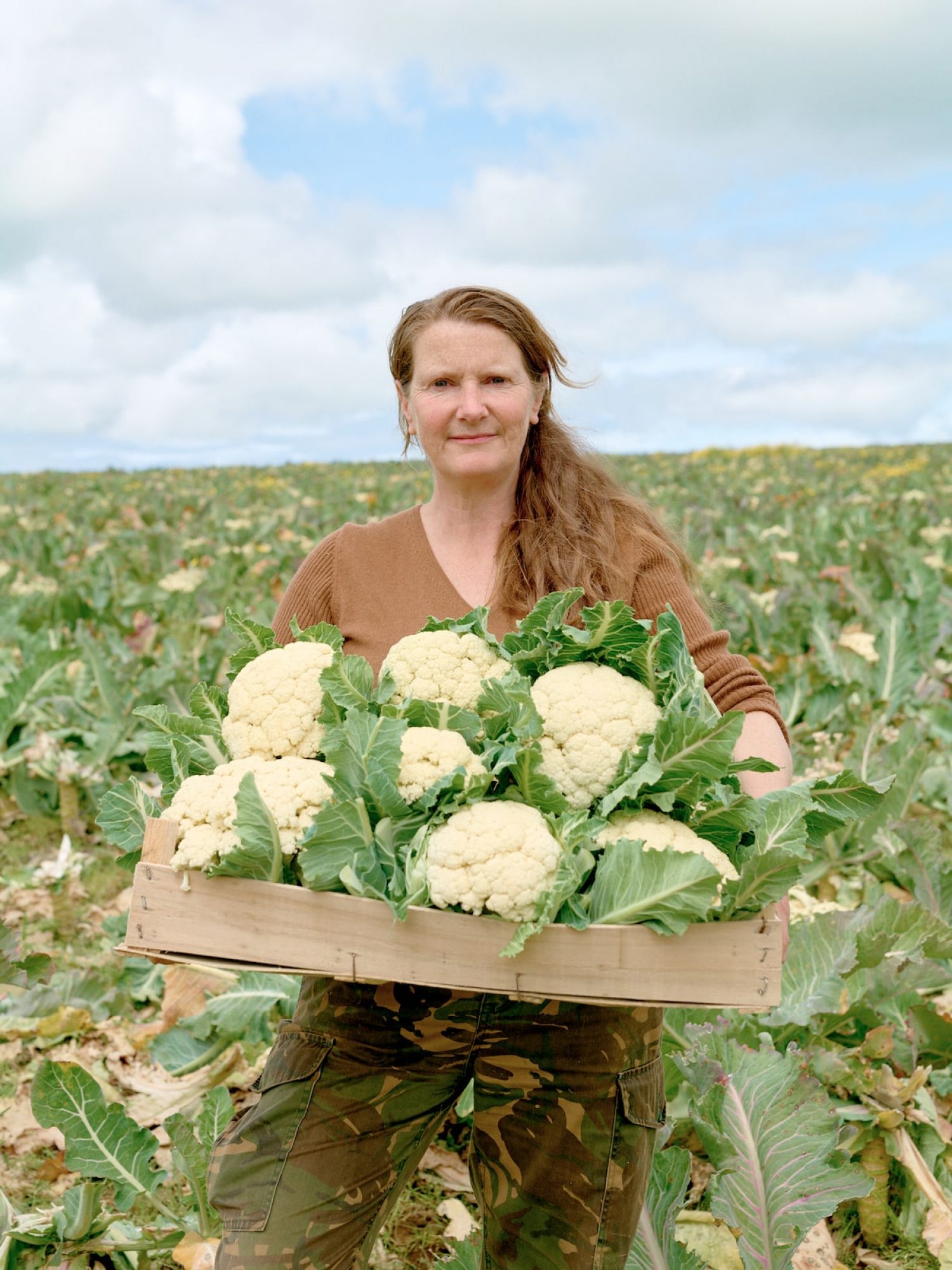 ‘People are getting the freshest veg literally straight from the fields,’ says Whitelaw. Image by James Bannister

The practice gets more than a passing mention in the Old Testament where gleaning is described as a charitable endeavour mandated by God, with landowners ordered to leave their field edges “for the orphan and for the widow”.

In 18th-century England, the poor had a legal right of gleaning unharvested produce. They were summoned to the land by the ringing of church bells.

Gleaning’s rise in popularity is partly down to Cambridge historian and activist Tristram Stuart, who co-founded the Gleaning NetworkIt was first made part of Feedback Global’s food waste charity Feedback Global in 2011.

Proponents of the idea believe that it will soon become as commonplace in society as charity walks and beach cleans. Instead of church bells, the gleaners’ call to action is the alarm sounded by a broken food system, amplified by the spiralling cost of living. 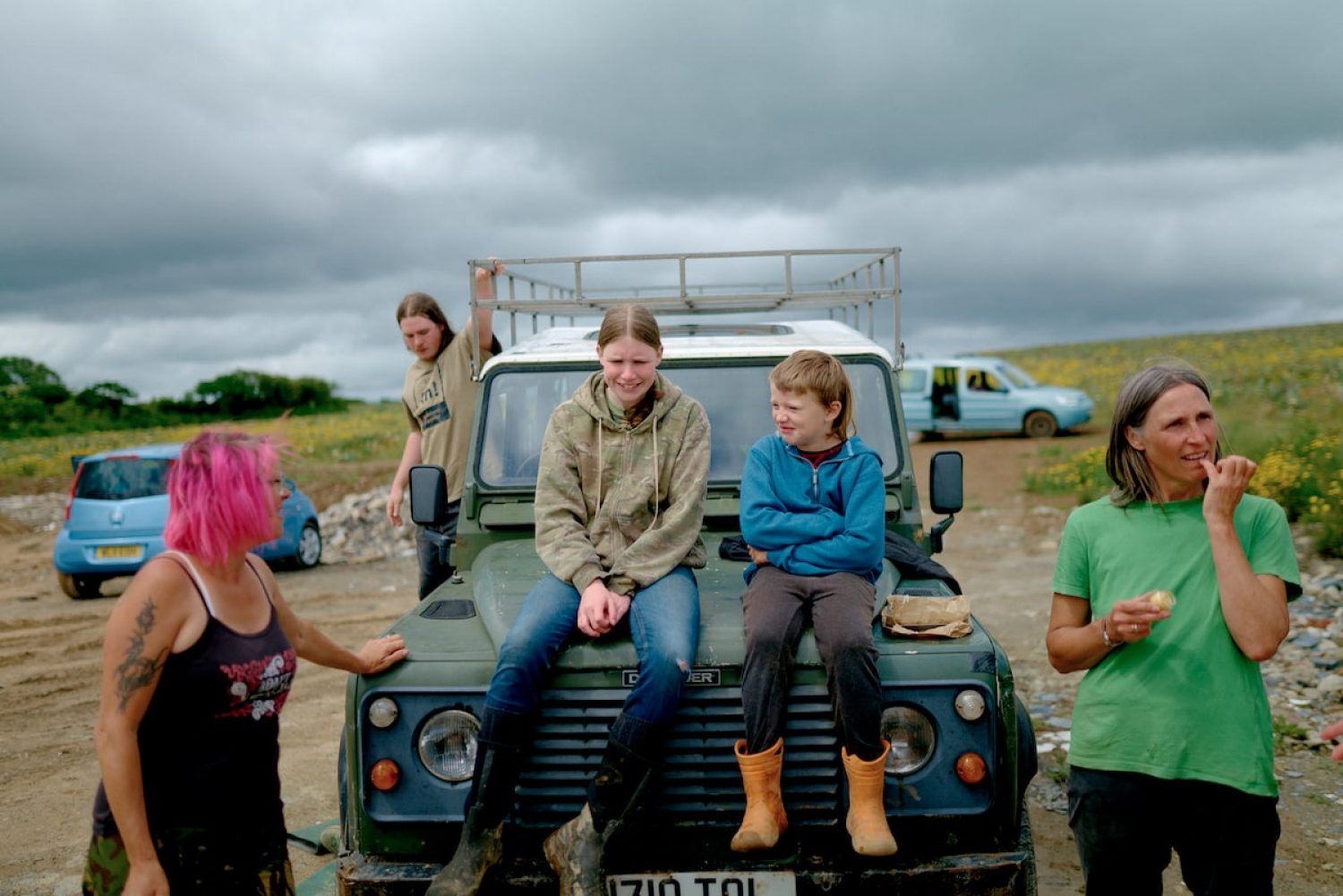 Whitelaw – whose background is in regenerative agriculture – was moved to set up her own gleaning network after filmmaker Simon Reeve shone a light on Cornwall’s hidden deprivation in his 2020 documentary series exploring the county.

She manages a team consisting of eight coordinators. Some of them are paid part-time through grant funding from Feeding Britain.

“It’s a team made up mainly of women who grow food,” Whitelaw says. “A fantastic bunch. They are tough cookies – they can push that wheelbarrow up that hill over and over again – but they’re also really good communicators, they know how to speak to farmers.” 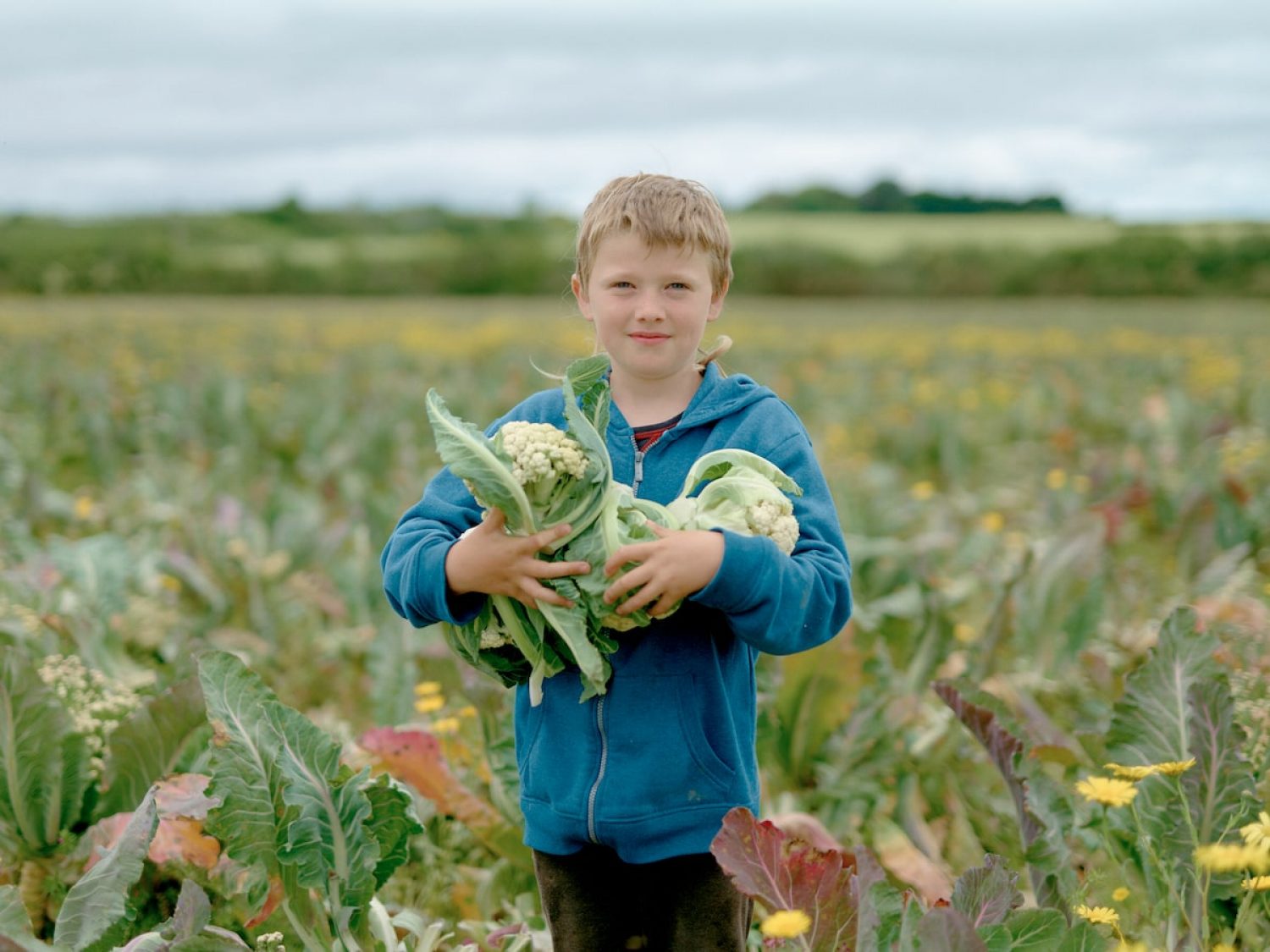 Forging lasting alliances with farmers is key to gleaning projects’ success – and to securing a variety of produce. The Cornwall network has harvested vegetables, courgettes and beetroot from 20 farmers since it was established last year.

“We’re delighted to help where we can, especially at the moment when people are struggling. It’s the least we can do,” says Tom Simmons of Riviera Produce, one of Whitelaw’s regulars and a leading supermarket supplier.

Whitelaw acknowledges that it has been difficult to build these relationships despite the goodwill of others. “I’ve been ignored, and I’ve had large organisations telling me bluntly, ‘no’. I had one farmer tell me if people can’t afford food, they should get a job with him.”

It’s a really jolly atmosphere – any time I go gleaning, I am lifted up

A typical day’s gleaning starts early. Volunteers – up to 20 at a time – chat as they work in pairs, stooping to slice brassicas from the ground.

“It’s a really jolly atmosphere – any time I go gleaning, I am lifted up,” says Whitelaw, emphasising its social aspect and sense of camaraderie. “For the volunteers, it’s so good for mental health, getting outside and doing something practical that’s good for the planet.”

In more prosaic moments, gleaning means collecting the ‘outgrades’ – the potatoes too large for crisp packets or the blemished cauliflowers – from packing sheds. 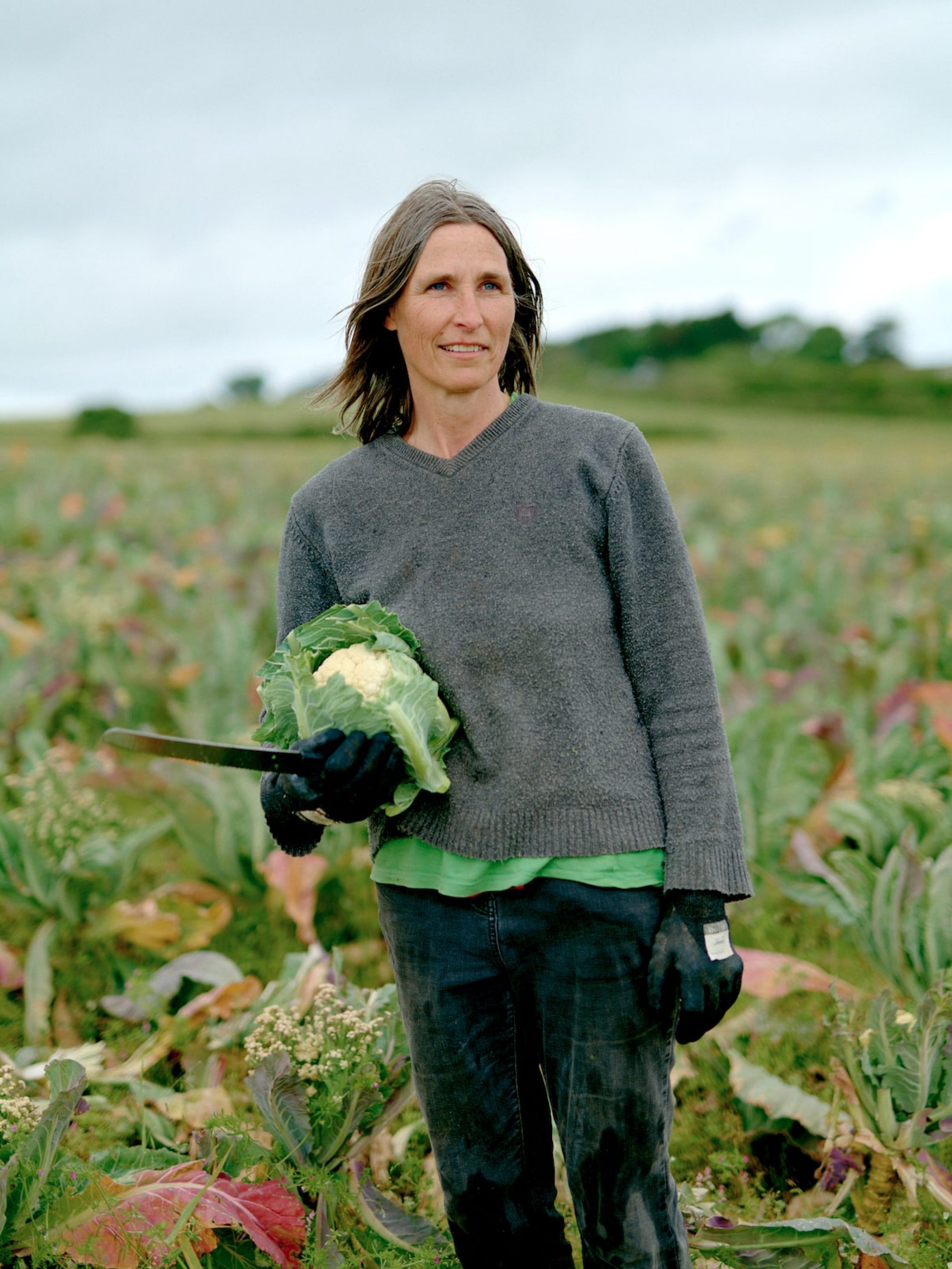 Teresa Thorne, the co-coordinator, works with farmers and food banks to distribute the produce. Sometimes, she even sends out 300 crates per day along with recipes.

“The kitchens we work with think it’s brilliant,” she says. “They get to cook healthy food from scratch using the freshest produce. It can go from field to plate in one day, and often to people who have very restricted diets. We’re providing the best vitamins and minerals they’re getting in their week.”

Mother-of-four Holly Davies receives gleaned produce from Penzance food bank and says: “The quality is amazing, and the children love it.”

Meanwhile Camborne, Pool and Redruth food bank – one of Cornwall’s largest – was handing out 750 meals an hour back in the summer of 2019. Demand is surging once again since the cancellation of the £20 Universal Credit uplift, combined with inflated food and fuel prices. 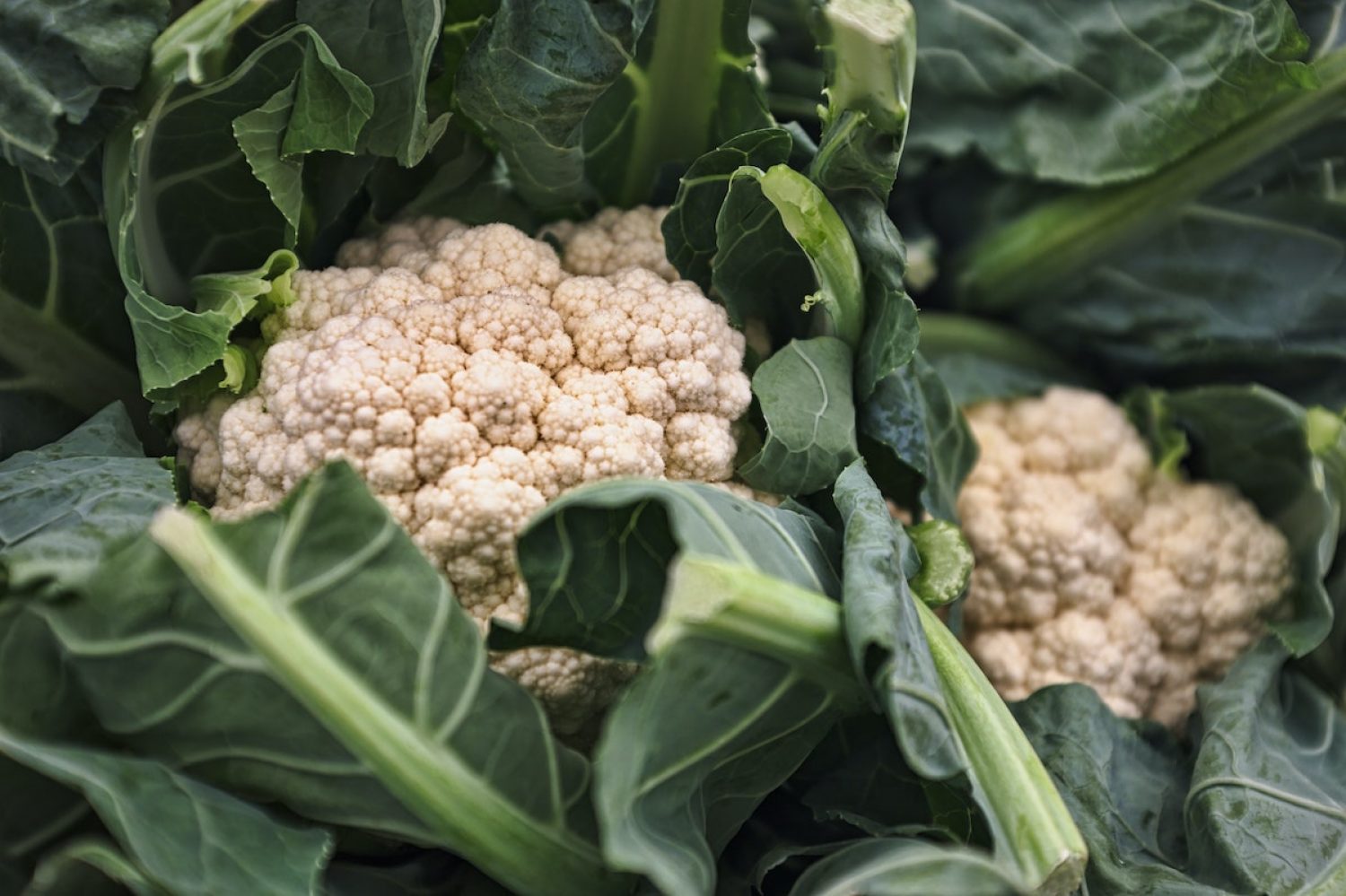 Many produce is rejected by supermarkets for aesthetic reasons. Image: Eric Prouzet

“The fruit and veg we get from supermarkets – the yellow sticker stuff – is on its last legs, so it doesn’t last long,” says operations manager Joyce Duffin. “The gleaning project has made an enormous difference – we get so much from them.”

They could actually be getting more. Whitelaw estimates that Cornwall has an average of 20,000 tonnes annually of gleanable food going to waste. UK-wide, as much as 1.6m tonnes of food worth around £500m is wasted at farm level.

Farms will plant more than what is required by their supermarket contracts to prevent produce from ripening too soon or too late. They might grow two fields of cauliflowers, for example, knowing half are doomed to fail supermarkets’ strict cosmetic requirements.

Sometimes, labour shortages and the thin margins at challenging farm gate prices can make a crop too costly to harvest. Instead, it is replanted in the field. 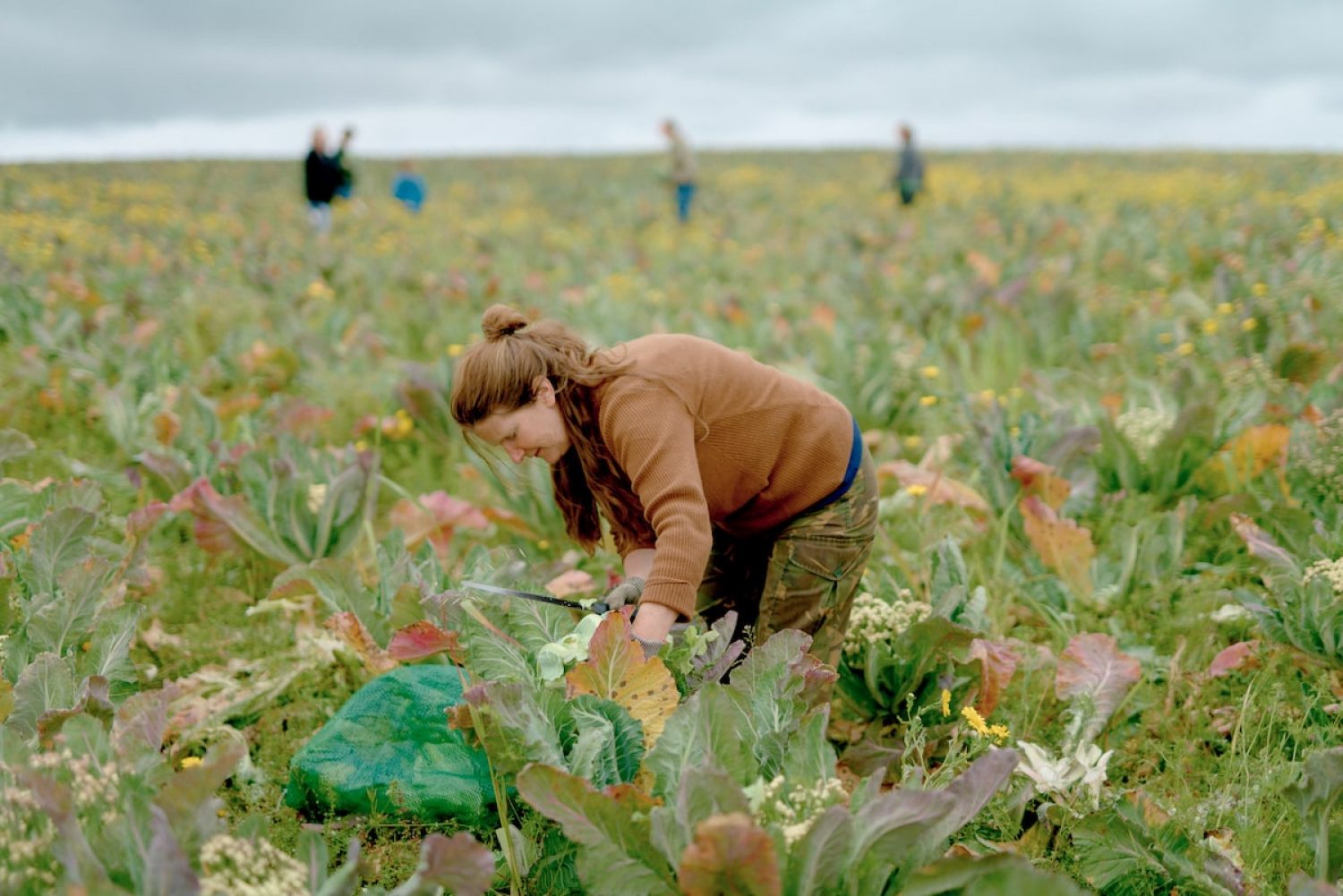 In the UK, up to 1.6 million tonnes of food are wasted at farm level. Image by James Bannister

While gleaning has benefits as a short-term salve in troubled times, this reliance on overproduction – and on volunteers – is symptomatic of a deeper malaise in our food systems, says Feedback Global.

“Gleaning is not a solution to food insecurity,” explains Feedback’s Phil Holtam, who oversees the Gleaning Network’s activity in Sussex. “You can’t address poverty and its underlying causes with surplus food.

“Gleaning is much more a conversation about systemic overproduction of food, and a system that requires a large level of abundance, allowing quite a chunky margin to go to waste.

“Farmers see gleaning as a last resort – which is OK. There have been a few occasions where we’ve had some gleaning pencilled in and the grower has figured out a solution where they can sell their crop. That’s always the best outcome.”

Whitelaw and her crew are happy being that last resort for the moment. She budgets the cost of gleaning Cornwall’s 20,000-tonne annual food surplus at around £45k, and says that in the long run, supermarkets should be footing the bill, rather than leaning on volunteers to do their dirty work.

“I’m thinking big, but if we were to expand this, it’s actually within the ability of one of our big supermarkets to fund a national gleaning network,” she says.

“There’s a lot of inertia isn’t there? There’s a lot of talking shop. I get that people don’t want to make the wrong decisions about investment and the future of our planet, but it’s like – hurry up. We have the answers. Let’s get on with it.”