Kim Kardashian has proven that she’s more than a mega influencer and business owner. The 41-year old has been open about her passions for social justice and giving back. She has stated that she wants to open a pro-bono law firm. Kim Kardashian said,

“Hopefully one day I can start a law firm where we can help people pro bono and hire people who were formerly incarcerated.”

According to reports, Kim Kardashian and her brand SKIMS helped members of Afghanistan’s women’s youth development soccer team fly to Britain. The effort to fly the Pakistani members to Britain was also supported by a New York rabbi as well as a U.K soccer club. The plane carried more than 30 teenaged players along with their families which made the total about 130 people that landed at Stansted Airport near London. They will be spending 10 days in coronavirus quarantine before entering Britain. 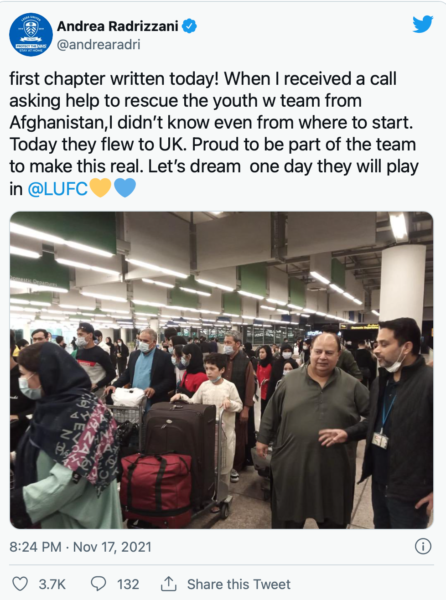 According to reports, thousands of Afghans were evacuated from their homelands after Kabul fell under Taliban militants in August Britain. Women playing sports are seen as defiant against the Taliban and it’s looked at as a political act. Since the Taliban have come back into a position of power, many Afghanistan women left. However, members of this group come largely from poor backgrounds so there was no escape.

Tzedek Association in the United States provided support to the team, a non-profit organization whose founder, Rabbi Moshe Martinten, was a former collaborator. Kardashiancriminal justice reform. He said that he had spoken to the reality star and that he was happy to help.

“Maybe an hour later, after the Zoom call, I got a text message that Kim wants to fund the entire flight.”

What are your thoughts on Kim’s involvement with helping the soccer players? Comment below.