Restaurant chefs are reinventing school dinners in the UK

Top chefs are helping transform school meals in deprived areas, serving up food that is fresh, nutritious – and, most of all, fun

Food can either be medicine or it can be poison,” says Nicole Pisani, co-founder of Chefs in Schools, a charity that aims improve school meals and teaches children how to cook. “It’s our choice.”

Eight years ago, Pisani quit her job as head chef at one of London’s chicest restaurants – Soho’s Nopi, which was set up by Yotam Ottolenghi – and made the unusual move to become a school chef at Gayhurst community school in Hackney.

“The reason I fell in love with food was to see people enjoy it and to feel like you’re connecting with someone because you’ve cooked for them,” she says. “But the longer you spend in restaurants, the less of that good feeling you get.”

This surprising move paid off three years ago when Pisani and Naomi Duncan started Chefs in Schools. Now, the project has 44 passionate, trained chefs in 44 schools in the UK, most of which are in socially deprived regions. They feed around 16,000 children each day and teach them how to cook.

“Cooking with children is what I love most,” Pisani declares. “You turn into a five-year-old yourself. It’s hard not to be happy.” When she first started teaching children – using recipes such as beetroot brownies and banana splits – Pisani was blown away by how enthusiastic they were.

“They were literally excited about grating cheese,” she says. “They loved going up and down the grater. I thought: ‘This is a lost workforce’.” 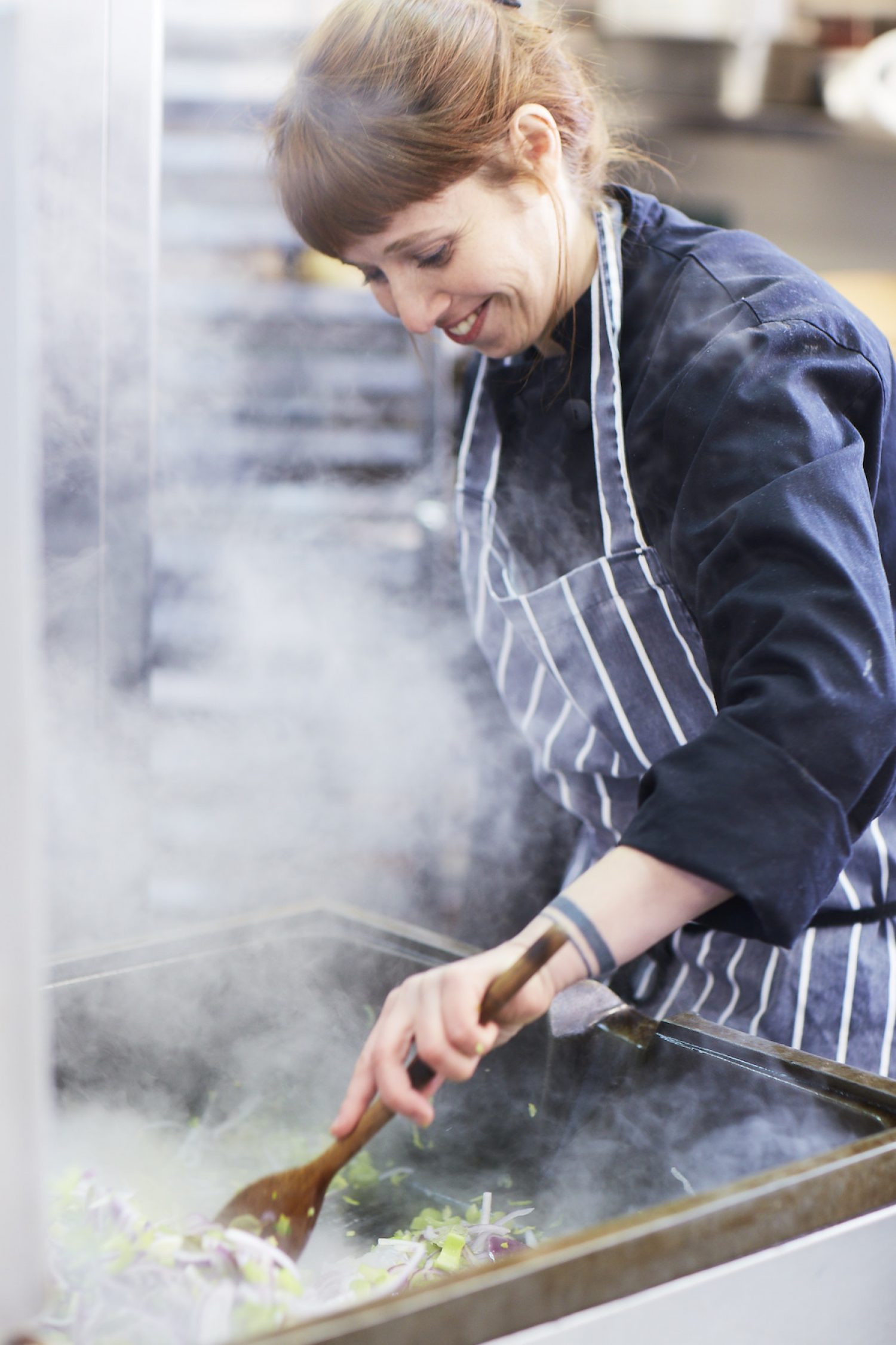 ‘Cooking with children is what I love most. It’s hard not to be happy,’ says Pisani. Image: Harriet Clare

Her favourite moment was teaching seven- to fourteen-year-old schoolchildren how to make chicken and vegetable paella in a firepit. “They loved it,” Pisani laughs. “Cooking on fire is one of the oldest ways of cooking. There’s something quite mindful about it.”

Chefs in Schools offers school transformations to assist schools in improving their kitchens. The organisation is also launching a school chefs qualification. This training course will cover aspects such as portion sizes, managing a team, and monitoring food waste. “The aim is to give school chefs more pride, show how important the role is, and for people to feel invested in cooking,” Pisani says.

In partnership with the Leap Federation Chefs in Schools also established the Hackney School of FoodLast March, a school was opened that teaches both schoolchildren and adults how to prepare delicious, healthy meals. 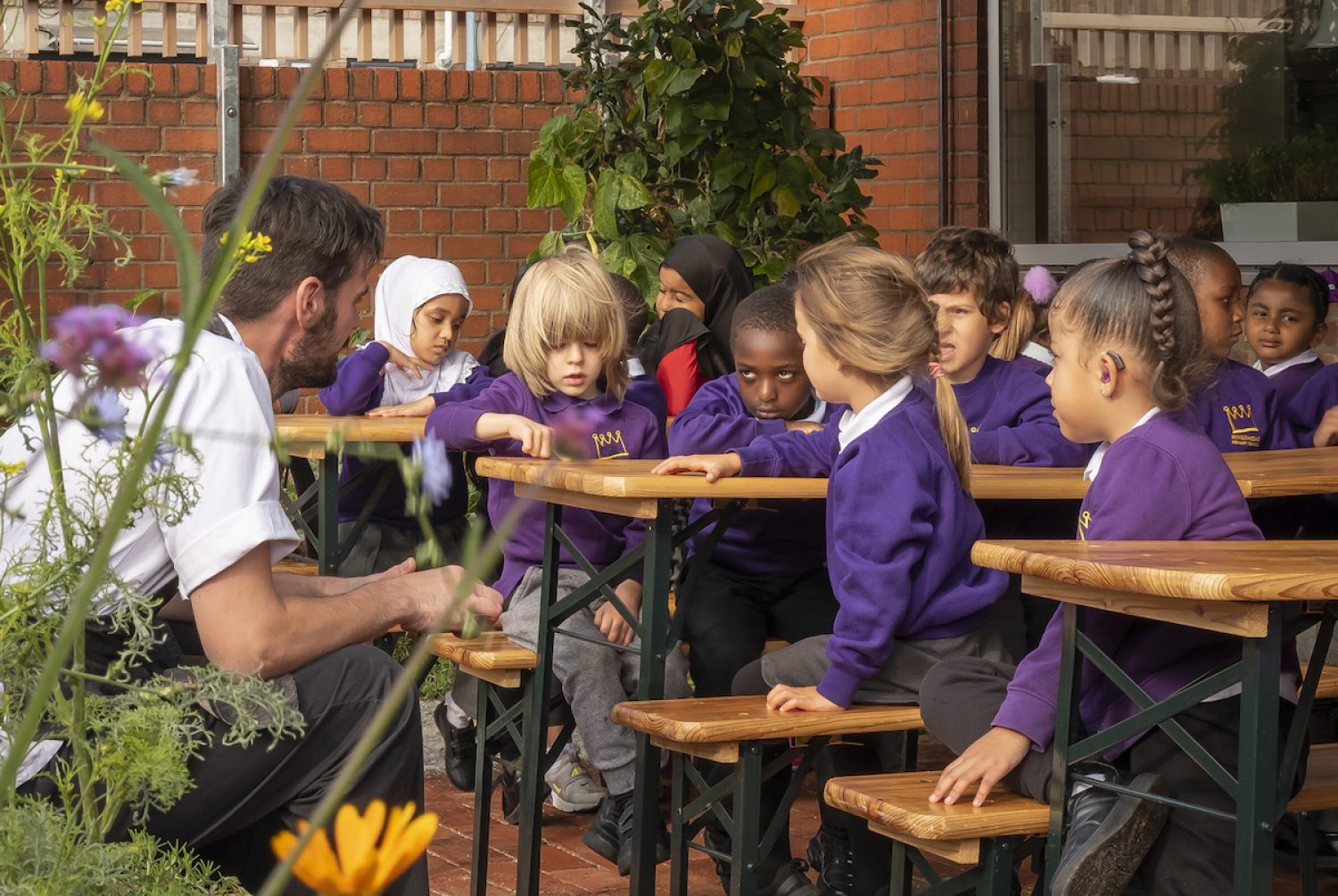 Hackney School of Food is a school that teaches children and adults how they can prepare healthy meals. Image: Jim Stephenson

“It’s really important that people know how to cook,” agrees Thomas Walker, head food educator at the school. “It’s an act of ownership in your life, because it helps your health and makes you feel good.”

The school has a large, bright kitchen, built in a renovated caretaker’s house, and an organic garden with apple and pear trees, a herb patch, honey bees, wildflowers and root vegetables.

Walker wants his pupils to know – tangibly – where their food comes from. “It’s this ‘seed to spoon, soil to mouth’ idea,” he says. “Meaning, we’ll pick something with the kids, prepare it, and eat it, it’s as fresh as you can get. I want them to realise that what we put into the soil feeds the plants, and they in turn feed us and give us energy.” 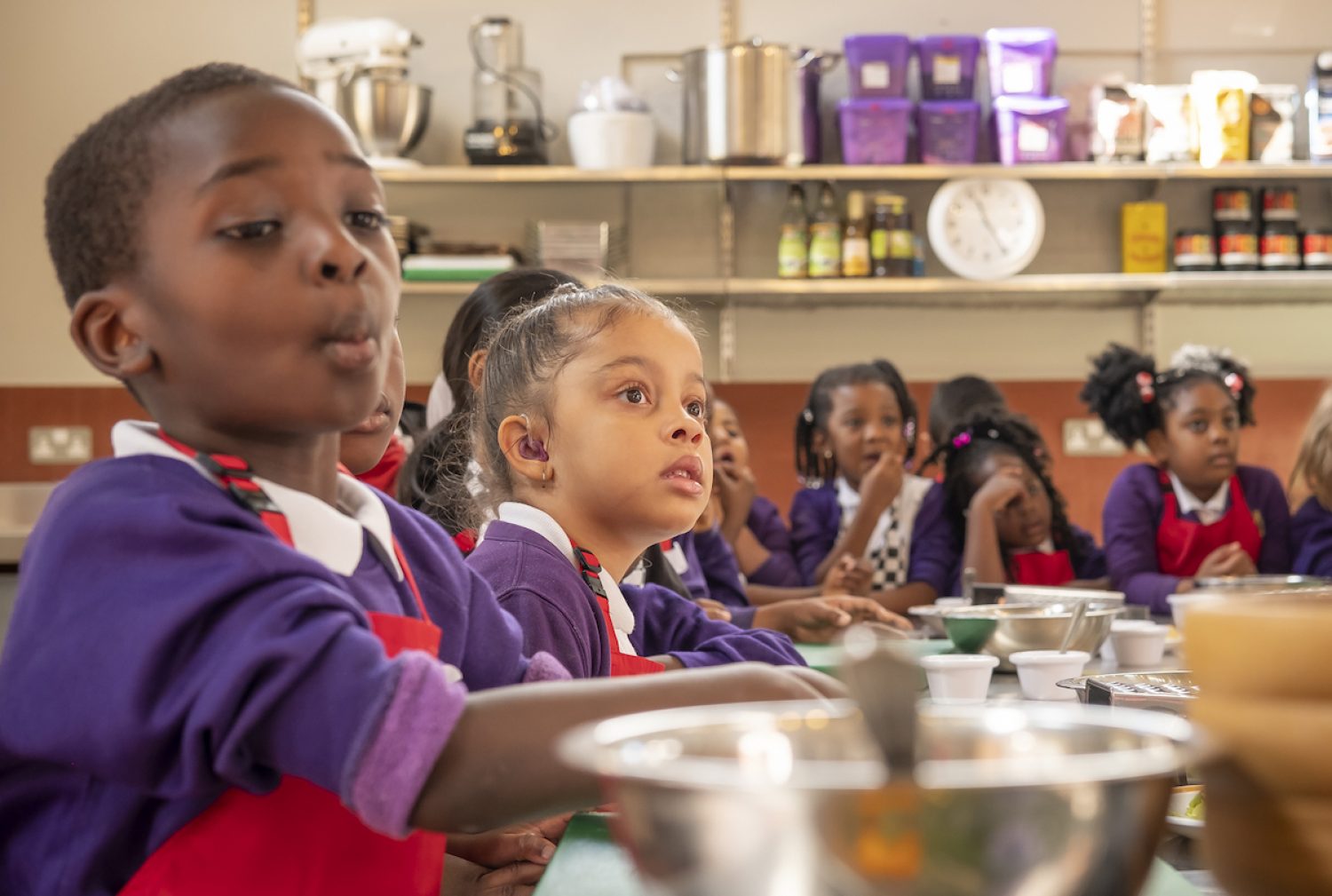 Schoolchildren cook their lunches by keeping one eye on the ingredients. Image: Jim Stephenson

Walker’s classes are taught about nutrition, as well as learning technical skills, such as grating and chopping, and a variety of recipes. Children often love cooking bread most, Walker says. “We do lots of different bread recipes. It can get messy.”

Walker said that while some children may be skeptical at first, he loves to see them change their minds. For example, one fussy eight-year-old didn’t like most of the ingredients in a vegetable soup. But after cooking and trying it, “he came up to me and said, ‘that is the best thing I’ve ever eaten’,” Walker recalls. “His pride in making it himself was amazing to see.”

Schools are not the only ones who love to cook. Walker recently taught a 70-year-old man, who was newly divorced, how to cook for the very first time. “He was so excited to go away and start his culinary career,” he enthuses. “You’re never too young – or too old – to learn to cook.”