A German startup launched speakers made from earth. They will help reduce e waste and save ancient skills. But, will they be a success?

If you’re going to invest in a set of speakers made from clay, it might be worth having some sort of swear jar-type arrangement nearby, for when people make the obvious quip: “Now that’s what I call a dirty baseline”. It would probably be fair to pay a quid.

Clay speakers? It might sound far-fetched, but in what’s believed to be a world first, music speakers moulded from Mother Earth have been brought to market.

Its makers – at a German startup called Mapu – say the product is around 80 per cent biodegradable. That’s not necessarily what most people look for in a set of speakers, but it’s an admirable quality at this time of waste awareness.

Electronic waste is growing all around the globe. The UN predicts that humanity could generate up to 120m tonnes annually by 2050, with much of the global north’s contribution disproprotionately accumulating in the global south. It is a threat to the planet and people because some developing countries lack strong safety and health standards and are unable to properly manage e-waste responsibly.

These speakers were inspired by a traditional Chilean water bowl, which is found in most Chilean homes. Mapu

While Mapu’s speakers contain some non-biodegradable materials, which are necessary to function – such as insulated wiring – they are mostly made of clay, leather and cork. These materials are sourced from Portugal’s biodiverse cork oak forests, which support the country’s ancient cork industry.

Mapu’s success in helping close a waste loop has gained international recognition. What Design Can Do – a global organisation that promotes sustainable design – announced the startup as one of its No Waste ChallengeThis year’s winners

It sounds great so far. Yet despite the speakers’ eco credentials, those behind them did not initially set out to jolt the acoustics industry into being more sustainable. The idea was to preserve traditional crafts in areas that were rapidly disappearing. Mapu cofounder Pablo Ocqueteau was a native of rural Chile.

There he noticed how most traditional craftspeople – potters among them – were, well, getting on a bit. “There was nobody to succeed them,” he says. Pottery workshops were closed as a result. 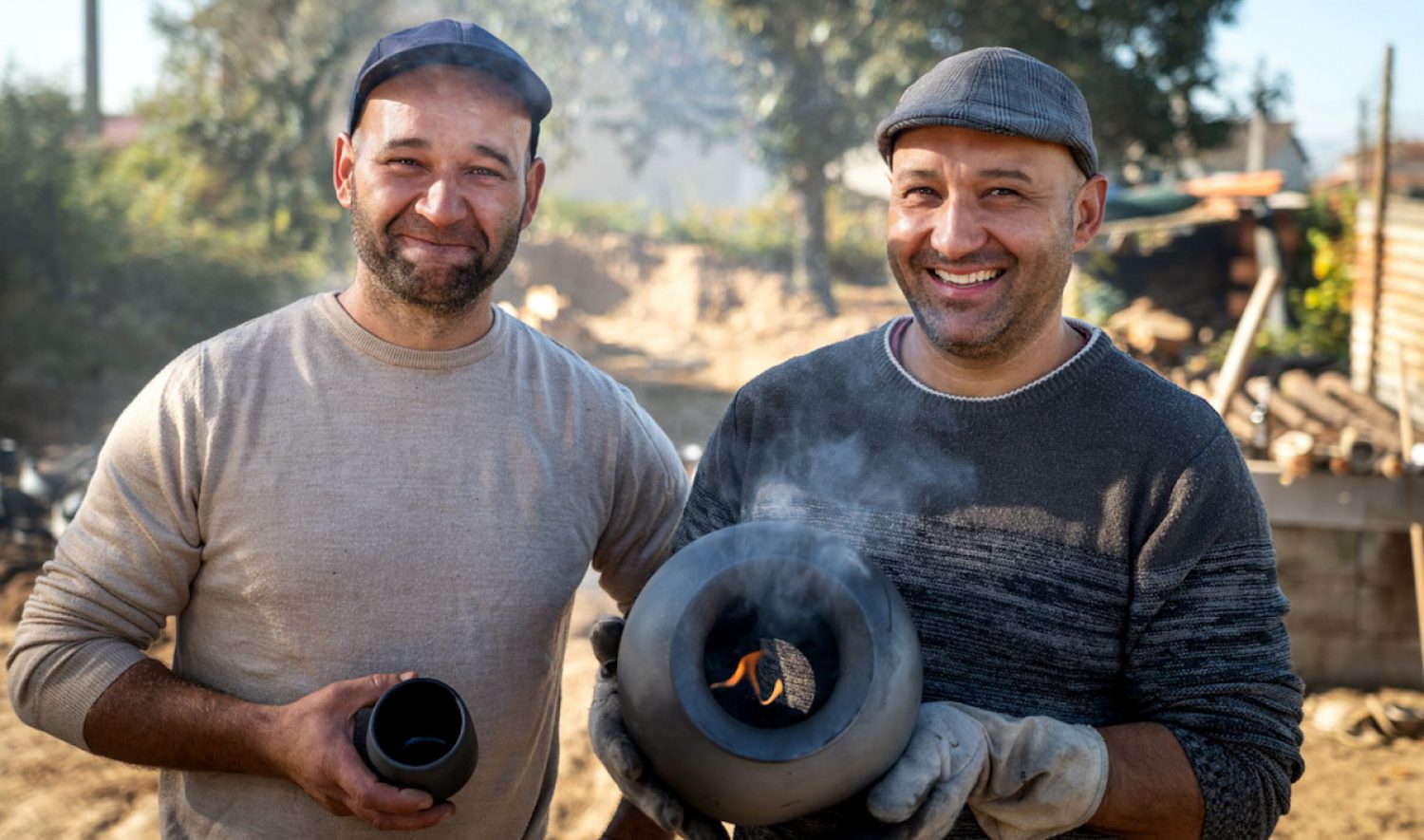 After setting it on the fire pit, Potters take care of a smoking speaker. Mapu

Ocqueteau and his partner, German-born Philine von Düszeln, wondered how they could help; how they could bring traditional Chilean crafts and ancestral knowledge into the 21st century. This thought kept them busy for a while.

One night, an idea came to Ocqueteau: “I had this moment when the light turned on,” he told Positive News. He was lying on a couch in Chile at the time. He was listening to music and his eyes wandered about the room. They finally landed on a clay bowl known as a tinaja, which cools water. These vessels are common among Chilean households. “I thought: ‘Maybe we could make a speaker out of that’.”

So that’s what he and Düszeln did. Craftspeople in nearby Nacimiento – a village once renowned for pottery but struggling to keep the art alive – were only too happy to help the pair realise their vision. The prototype was created.

Onwards to Germany, where Düszeln booked an appointment with an acoustics engineer. The professional verdict The adaptable clay jug was a great speaker.

We want to make crafts more appealing for young people.

Ocqueteau and Düszeln subsequently partnered with Sound Hub Denmark – an accelerator for sound and acoustics businesses – whose engineers tweaked the speaker’s design in the facilities of their partner, high-end Danish consumer electronics company, Bang & Olufsen.

Nacimiento’s potters have been creating small batches of the speakers for a long time, helping to bring a traditional craft to the digital age.

“The chance that we have [in Chile] of competing in the electronics world is impossible,” says Ocqueteau. “Making a phone or a computer – it’s not going to happen. But we can compete in another way.”

The pair is now bringing the handmade speakers on the market. A price has yet to be confirmed, but they are expected to start from around €790 (£664) per speaker, which is competitive in the premium acoustics market. 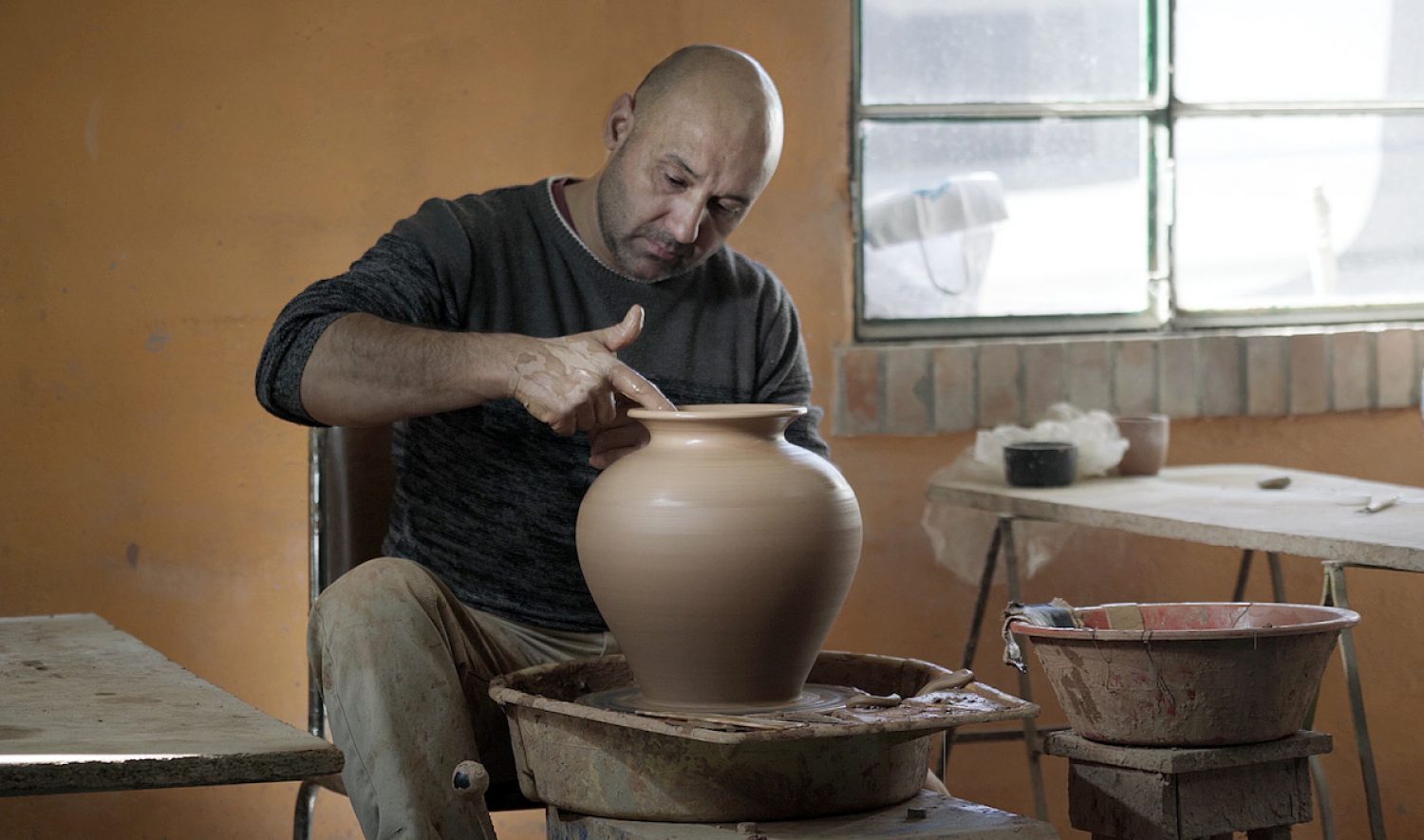 Mapu hopes that the speakers will highlight the virtues and sustainability of clay. Mapu

Düszeln says that Mapu typically pays craftspeople an above-average fee for their work. It has also supported tree-planting projects through ProNativo – an environmental NGO – as well as a project that fed communities in Santiago during the first Covid Lockdown. “We want to have a positive impact in our communities,” says Düszeln.

Mapu has also been working with artisans in Molelos (Portugal) on a second line of speakers.

“People are super proud of them,” says Düszeln. “We want to help make the crafts more attractive for young people again,” she adds. “Our dream is to start another production line with a new craft community every year.”

The speakers could also help to increase the benefits of clay. This is an important point in a world where sustainability is being questioned. “It’s a low-impact material that’s available everywhere in huge quantities,” says Düszeln. “And it’s beautiful to work with.”

Design-driven innovations can change the world
The No Waste Challenge is an international design competition that addresses waste and consumerism’s impact on the planet.
Check out the 16 winners

This Madrid-based startup works in collaboration with artisans from Colombia, Chile, Ethiopia and Ghana to create handwoven lamps.

Mapu was greatly influenced by the Brazilian brothers Humberto (Fernando) The pair reinterpret and reuse materials to create ‘objects d’art’.