An article in The Times in 1894 warned of a calamity. If traffic congestion in England’s capital continued in line with current trends, it doomed, then “in 50 years, every street in London will be buried under nine feet of [horse] manure”.

The story may well be apocryphal (no such article has come to light in the archives), but it’s often quoted as a reminder that predicting the future on the basis of past trends can leave us looking rather silly.

It came to my mind during some of the heated debates that have convulsed London – including my home borough of Hackney – over the introduction of low-traffic neighbourhoods (LTNs). Depending on how you view it, this wave of road restrictions can be seen as either a robust response against the twin scourges that are climate change, poor air quality, and an undemocratic intervention which worsens congestion and hits the working-class people the hardest.

LTNs were depicted by their opponents in a debate I attended. They were seen as part a gentrifying wave in which plumbers, van drivers and builders are being pushed aside. The posh cycling incomers don’t even need to have a tool heavier that the laptop in their man-bag. Ouch.

In fact, despite the sound and fury of opponents, and some admittedly clumsy and inappropriate impositions of LTNs by councils, polls tend to show they have majority support – and these are backed up by local election results. Pollution levels have been reduced and traffic increases on main roads nearby have largely ceased to be a problem.

Some argue that we should wait until electric vehicles (EVs), which will make pollution problems disappear, and then the case for LTNs will disappear.

But it’s surely a failure of imagination to think that the only conceivable future for a liveable city is one where chunky metal boxes sit in gridlock. There were streets before cars and there will be more. 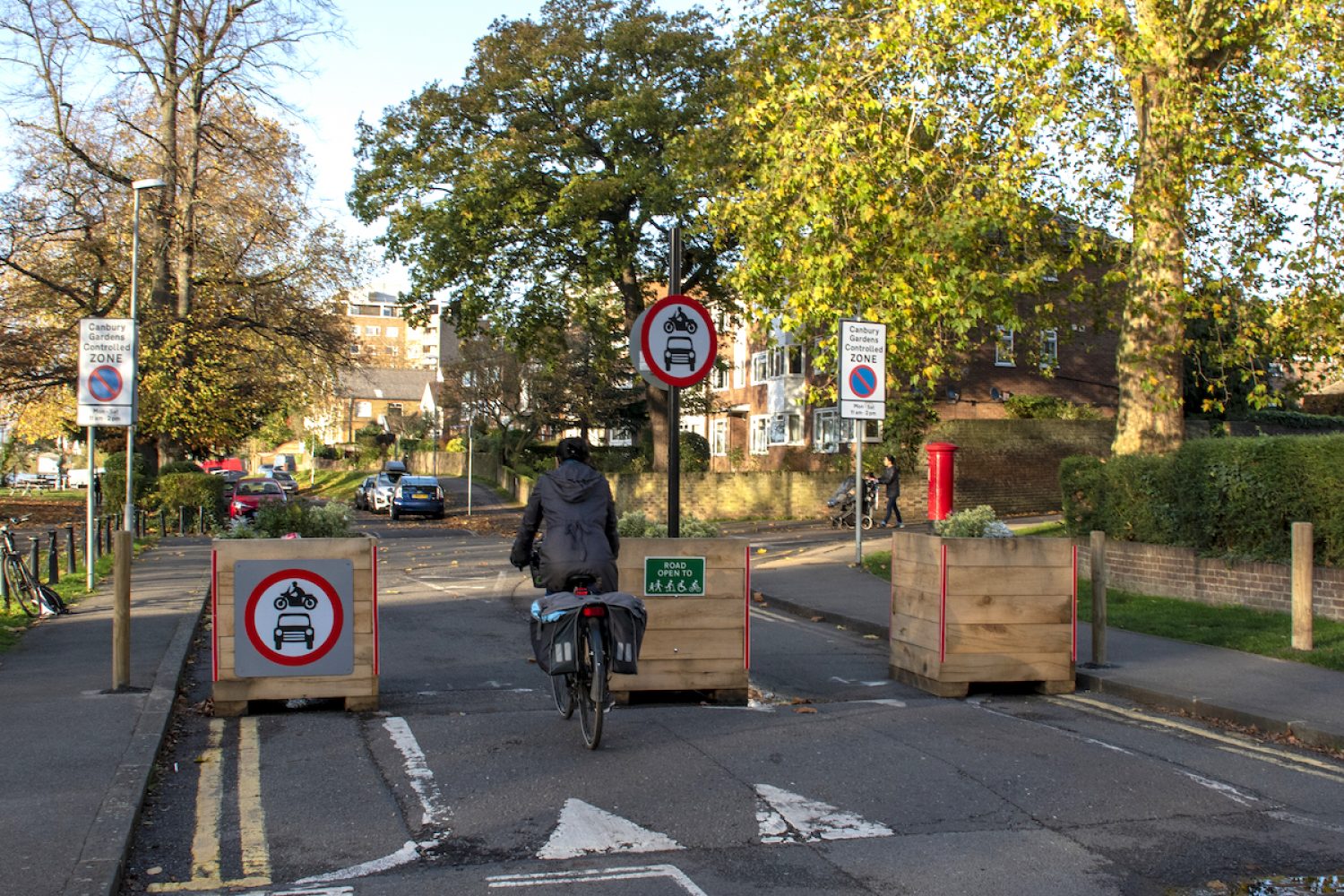 There are a few straws in the wind as to what that future might look. It comes on three, sometimes four, wheels, but they’re not attached to a car. The humble electric cargo bicycle is poised for revolution in the way that cities look, sound and smell. Sales are on the rise: more than 100,000 bikes are now on the streets in Europe, and the number is expected to rise by 60% in the UK in the next year. Raleigh, the bicycle manufacturer, is betting big that they will grow 15 times in the next five years.

And no surprise: a raft of new studies show that when it comes to deliveries, e-bikes have a host of advantages: they glide quickly through the city streets, able to deliver packages 60 per cent faster than their van equivalents, and they’re cleaner and quieter, too, saving around 90 per cent in carbon emissions. And of course, they cut congestion – a cargo bike uses a fraction of the road space of a typical delivery van.

This is just as well, given the surge in home deliveries brought about by the pandemic – which shows little sign of levelling off in a post-lockdown world.

Cue a group of new initiatives, both large and small, that are aimed at promoting the e-alternative. Transport for London collaborates with Crossrail and HS2 companies to test cargo bikes for delivering tools and equipment. New schemes have been established in cities such as Coventry, Cambridge, Nottingham and Cambridge with government funding. Ludlow in Shropshire Islabikes has teamed up with the town’s sustainable transport group to offer free deliveries to local businesses. 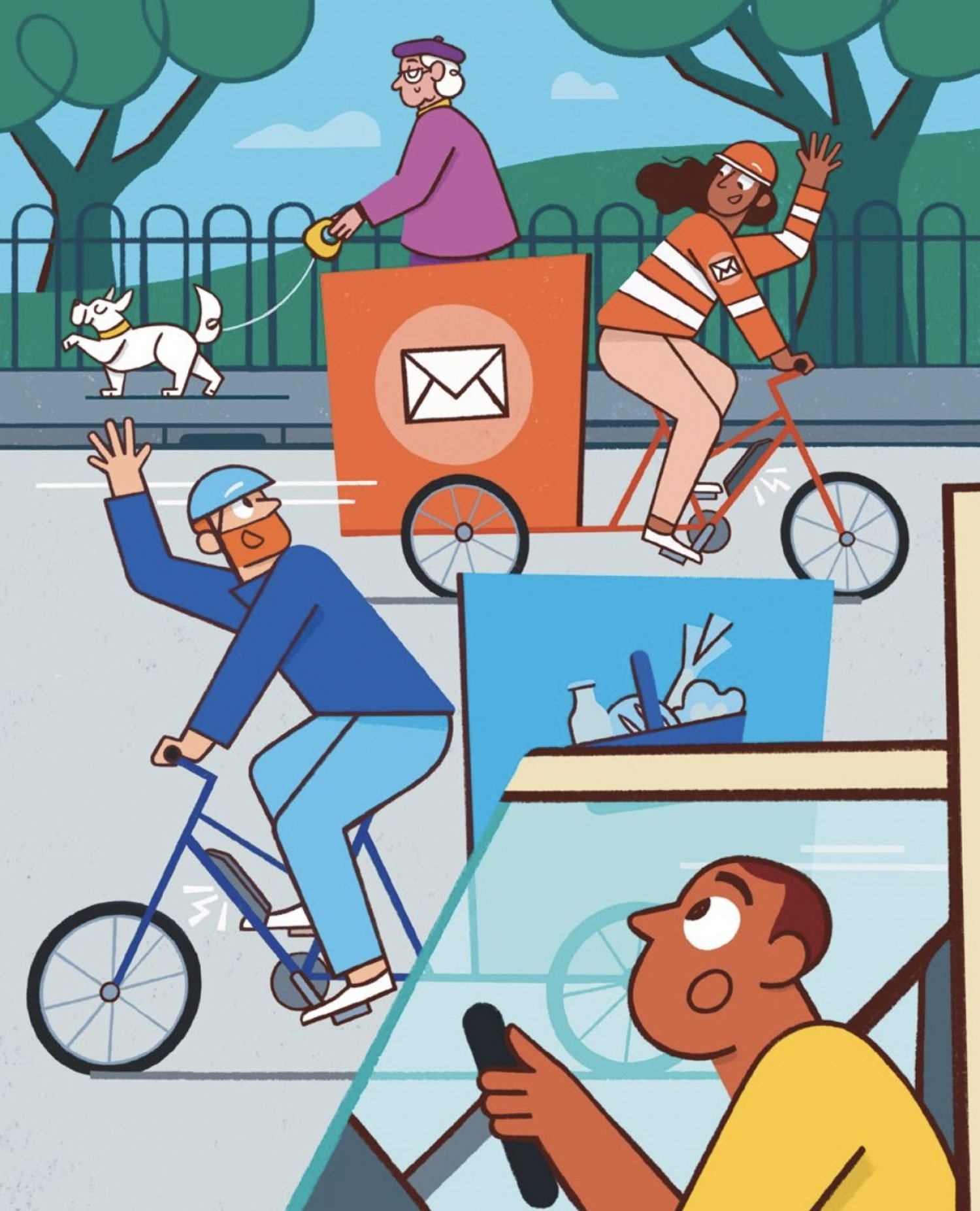 Meanwhile, cities from Manchester to Nijmegen in the Netherlands are exploring forms of ‘urban consolidation centres’: hubs on the edges of towns, where trucks can unload packages to be picked up by e-cargo bikes and small EVs for the final miles, so avoiding the need for heavy-polluting vehicles to roar down city streets in the first place.

This could just be the beginning of the delivery revolution. Already many workers, including plumbers, craftspeople, and DJs, are switching from heavy vans to lighter e-cargo bicycles. The coming years will surely spawn some innovative variations in ‘micro EVs’, offering greater carrying capacity, comfort and protection from the elements, suitable for all manner of urban uses, with a fraction of the impact on our streets in terms of pollution, noise and congestion.

Put all this together, and some of the fractious debate over LTNs could soon seem outdated – not least because swathes of the future city could be relatively low-traffic by default – in the sense of traffic in its current, problematic guise anyway. In short, we are at one those inflection points where past experience ceases to be a reliable guide to future. Three cheers for this.

Martin Wright is the chairperson of Positive News